Standing in faith, especially when you’re under bias or unfair criticism and being compared against another person, Is always challenging.

Not necessarily a topic many followers of my YouTube or other Social Media channels would want to read or talk about, is trusting God. Despite the circumstances, and despite pressure from others, no matter how privileged a position they carry in our life, God is trustworthy.

I’ve learned one thing very clearly; nothing I say or do will persuade someone who has a negative perspective about me, due to their own bias or selfishness, will change their heart or hidden thoughts towards me.

I’ve also learned, giving in to the temptation to try to win someone over or persuade that individual to the contrary, is nothing more than opening yourself up to an endless cycle of being used and manipulated.

If my true value is based on God’s opinion of me, and God’s value and intentions for me, and I genuinely believe that to be true; then I can be confident enough to walk and and escape those traps. I may have to stop, pause and just shut my mouth from defending myself. But its possible.

Those traps that used to cause me to continue to be attracted to, used by and abused by, manipulators with a pretty face and nice smiles, but a dark soul, are a challenge to overcome.

It can become very discouraging when those who would clearly or blindly control us; people we live with, people who our lives are intricately or permanently connected to; such as family members, are the ones devaluing us.

So it is a good thing, when a prophetic word gets released from an established prophetic person, in a discouraging and timely moment.

A timely reminder of Gods existence and prevalent presence daily, hourly, in our lives.

Bill Burns of Faith Tabernacle in Colorado is one of those prophetic voices. And today, did just that, in this timely prophetic word.

Perhaps it’s timely only for me, but I expect it may also timely for you, if and when you find and read this.

Attached is a word of reminder and encouragement. 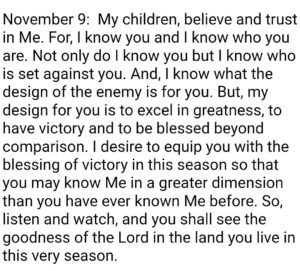